Checking and adjusting valve lash is usually forgotten about, even by the pros. Your mower engine valve lash is important, when the lash is out it puts an unnecessary load on other components.

So what is lawn mower engine valve adjustment? Valve lash is a precise specified gap between the valve tip and the rocker. As an engine wears, this valve lash (gap) gets larger and needs to be checked and adjusted.

In this guide we'll check and adjust the valves on a walk behind mower, but the same principles apply to tractor mower engines, zero turns, snow blowers etc.

All four stroke single cylinder engines have valves, at least 2 per cylinder which open and close in a sequenced cycle. An engine breathes it inhales an air/gas mix through the inlet valve and exhales the spent gasses through the exhaust (muffler) valve.

Most valves are driven by push-rods and or camshaft, which are all connected and timed to the crankshaft. The push-rods open the valves by pushing on the rockers which in turn push on the valve tip. The clearance between the valve tip and rocker is known as valve lash.

Most but not all engines will have adjustable lash, some engines are set from factory and don't provide for adjustment. (Kawasaki twin cylinder tractor engines).

If you have an ohv engine, it's most likely you have valves that need adjusting. 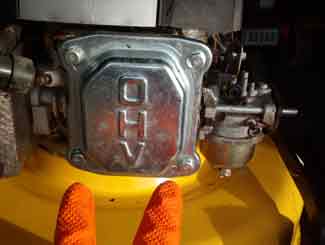 Usually stamped on the valve cover or on the engine cover.

Most mowers will have a compression release mechanism, its job is to open the valves a little early, releasing cylinder pressure. This makes pulling the starter cord less physically demanding.

When the engine hits 350 rpm, the plug fires and the engine starts, the release mechanism is then deactivated by a centrifugal flyweight.

A faulty mechanism will cause a hard to pull starter cord but is a much less likely cause than excessive valve lash.

Other reasons the starter cord is hard to pull:

Hard starting isn't always caused by excessive valve lash but it should be checked once per season. When the valve clearance is out of spec, the valve train timing is out.

The whole valve train is running behind and this can cause other issues such as blown head gaskets and oil leaks. 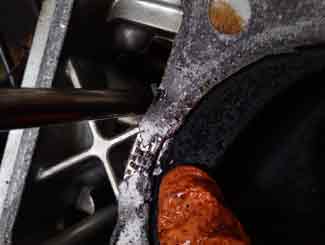 No starting may be caused by poor valve lash, damage or wear to valve train components. A sticking valve is a common complaint on engines that lay up for long periods. The symptoms will be a no start and no compression. 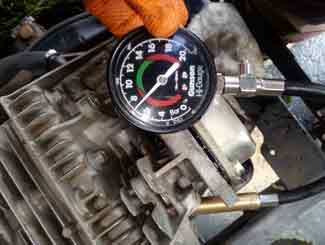 A compression test will confirm if your engine is at the end of its life.

Excessive lash will cause your engine to under perform and use more gas. Depending on how bad it is, you may also hear a tapping noise. If ignored it will cause the engine to prematurely wear out.

The engine isn't breathing correctly, its always off balance and may sound rough. A simple case of adjusting will have it sounding sweet again. 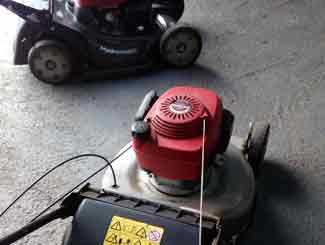 No power, hard on gas and its hard to start.

How To Adjust Lash

If you have an ohv engine and are experiencing any of the symptoms, then yes it's worth checking. In this guide we will be checking and adjusting the lash (gap) between the valve tip and the rocker arm.

Over head valve single cylinder engines have two valves and two rocker arms. The Intake valve opens when the rocker arm pushes on it, this allows fuel and air into the cylinder. After combustion the exhaust valve opens to allow gases out, this operation is sequenced.

An inexpensive tool called a Feeler gauge is needed to set the valve lash.

Each engine manufacturer will have a different spec for their engines, intake and exhaust measurements will sometimes differ also.

Check your valve lash spec with your engine maker. 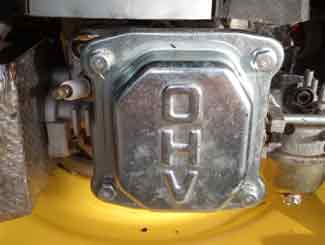 How do you know if you have an OHV engine? In most cases it will be stamped on the rocker cover. This is the cover at the very front of the engine. It may also be printed on the plastic engine cover.

Remove the plug and turn off the gas if fuel tap fitted. 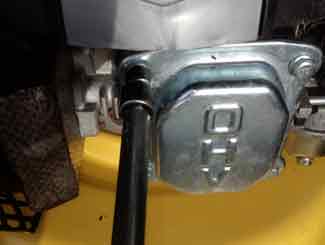 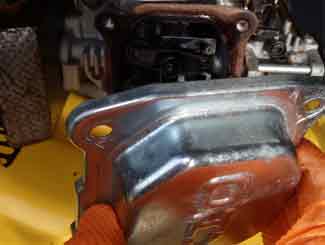 Remove the rocker cover, a rag will be needed as some oil will drip out.

The metal rocker cover will have a gasket, if not damaged may be reused, ideally it should be replaced. 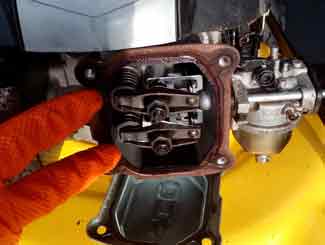 Have a helper rotate the engine while you watch that both valves are  compressing and releasing in turn. 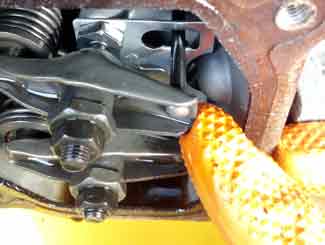 Rotate the engine by turning the blade, observe that both valve springs are being compressed in turn.

Note the push rods are in place and undamaged. These won't be fitted if your engine is over head cam (ohc), but all other info applies. 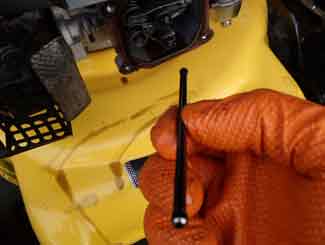 Push rods should be straight, its not uncommon for them to bend causing a no start condition. Replacing is a simple job. I have removed for demonstration purpose.

DO NOT REMOVE PUSH RODS TO ADJUST VALVES. 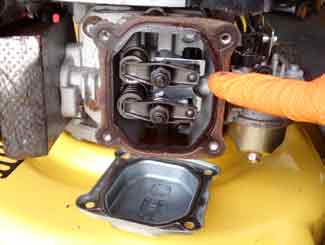 Locate the intake valve, it will be in line with the intake manifold and carburetor. 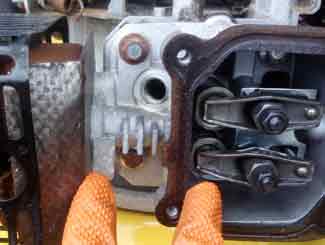 This is the exhaust valve, seen here adjacent to the muffler (exhaust). 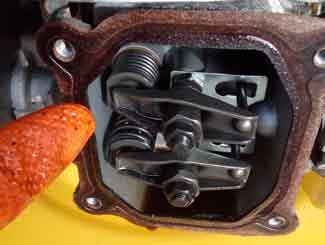 Rotate the engine clockwise (as seen from above the engine) by turning the blade.

Keep turning until the intake valve spring is fully compressed (valve open). This is the first stroke of the 4 stroke sequence. 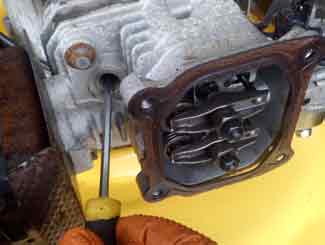 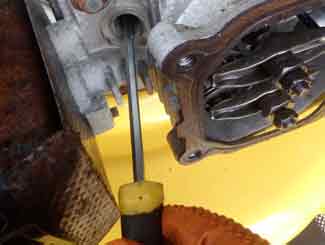 Insert a blunt object into the plug hole against the piston.

Turn clockwise again and watch as the blunt object is pushed out by the piston.

When fully out, it's known as Top Dead Centre (TDC) and is the 2nd stroke (compression).

Keep turning until the blunt object starts to go into the cylinder by approx. 1/4 inch. Note that both valve springs are unloaded. This is the beginning of the 3rd stroke (Power stroke). This is where we adjust valves. 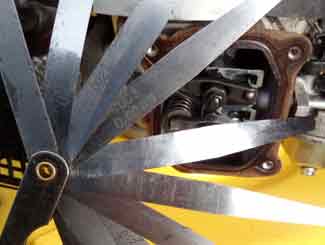 Measured in Metric and Imperial. The exhaust and intake clearances will differ. Exhaust value lash is usually larger as it gets hotter. Valve clearances differ from model to model so check with your engine manufacturer. 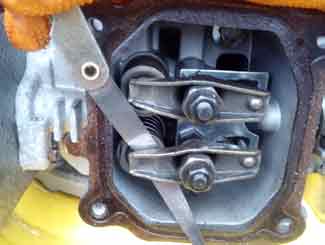 Slip the gauge blade between the rocker arm and valve tip. Move the gauge forward and back and feel the resistance.

If you feel a nice amount of resistance, meaning, the gauge is snug but does move when you push on it - Your good, no need to adjust this valve. If you don't feel any resistance, start adjusting. 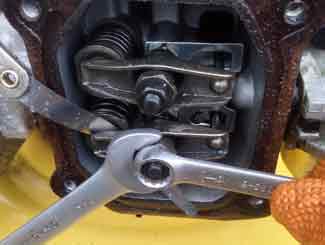 Here I am holding the adjuster nut (inner nut) with a wrench. The lock nut (outer nut) must be released before I can turn the adjuster.

Your engine valve set up may be different but the idea will be the same. In some cases the adjuster grub screw will be small Torx head, or other variation. 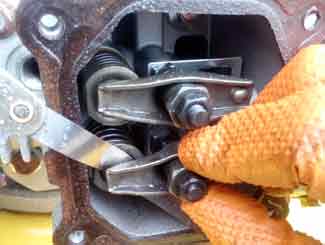 With the gauge in place move the adjusting nut in about a 1/8 turn and check gauge. In most cases only small adjustments are needed

Here I am turning adjuster small amounts while checking the gauge. You may have to use a wrench to adjust. 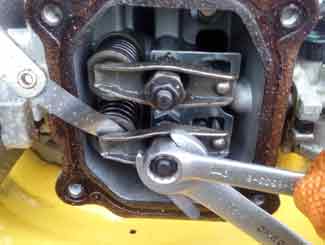 When your happy with the amount of resistance, hold adjusting nut in place with the wrench and tighten lock nut. 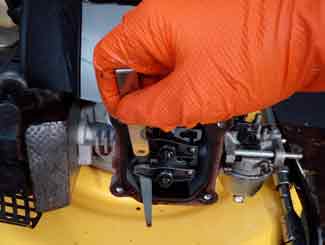 Rotate engine one turn 360° and check again, readjust if necessary.

Some valve setups can be tedious to get right, hang in there, it'll pay off. 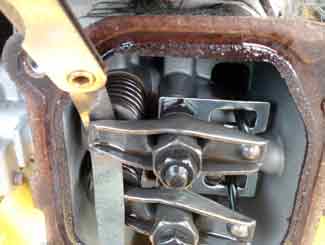 Now repeat the process for the intake valve and note the gauge size may be different.

Most of the time you can reuse the old gasket, but careful not to over tighten the cam cover, it causes them to leak.

If you need to replace them - gaskets other than cork can be replaced with a silicone gasket maker.

That wasn't so bad!

What does OHV mean on a lawn mower? OHV stands for overhead valve, it's an engine layout where the valves are positioned directly above the combustion chamber. This provides smoother running, more power and fuel efficiency.

Briggs & Stratton stuck exhaust valve? This can happen to mowers when they lay up over winter. Trapped moisture between the valve stem and sleeve turns to corrosion and causes them to stick. Removing the valve cover and taping them lightly with a piece of wood or rubber hammer will free them. 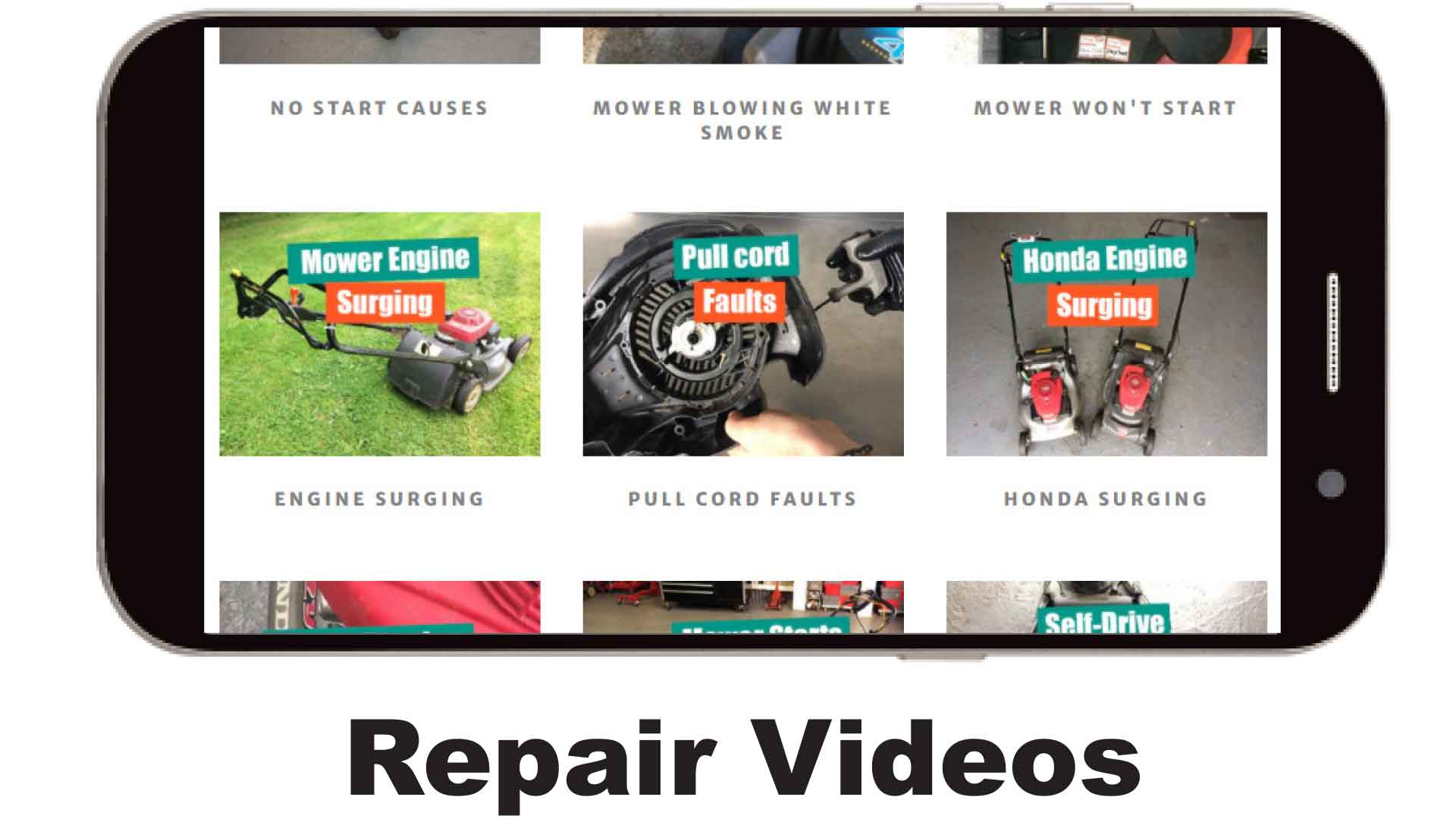 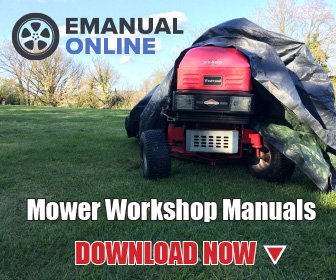