Should you run chainsaw at full throttle?

A chainsaw screaming at full tilt can hard to take, does make you wonder does it really need to run this fast.

On this page you’ll learn why full throttle is in most cases the safest. 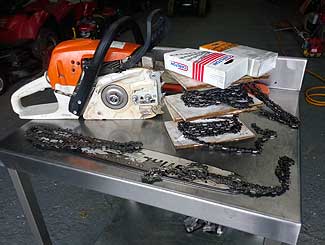 Full throttle or not?

Before running a saw at full throttle, allow the engine to warm up a little and always make sure you use bar oil, running a saw without bar oil will damage the chain and saw.

Running a chainsaw at half throttle isn’t advised for two main reasons:

Timber should be cut on full throttle for safety reasons. The risk of kickback is far greater when a saw contacts timber at lower speeds.

What is kickback? Kickback happens when a saw tip contacts the work-piece and violently throws the saw blade upwards and back-ways towards the operator.

It isn’t always this violent and your saw is fitted with a chain brake to help prevent injury.

You can help prevent kickback by:

But it always better to be prepared, having the right kit is really important, hoodies with dangling strings or torn clothes can easily be grabbed by the blade.

I encourage all saw owners to enlist on a training day, your local hardware store will likely know where these type day courses are held.

A two stroke chainsaw engine is designed to run at full tilt, it’s at it happiest on full song. Running at half throttle for anything other than short periods isn’t advised.

All engines need lubrication to help reduce friction and cool internal engine components. Without oil, an engine will stop dead, and isn’t repairable.

A chainsaw, as you know doesn’t have regular engine oil like a car. Instead the oil is mixed with the gas, without oil in the gas mix, the little two stroke engine will seize.

why are 2 stroke engines noisy?

A lawn mower and your car engine powers the piston only on every forth cycle of the engine.

The increased power strokes of a chainsaw allows the engine to rotate at far greater rpm than a four stroke engine, and it can get up to speed far more quickly.

The speed and increased power strokes (explosions) creates a lot more noise than a four stroke.

When a saw is at full throttle its carburetor is tuned to supply the engine with a rich gas/oil mix. Meaning the engine is well protected from the risk of seizing.

However, when running at half throttle, a saw runs leaner, and by leaner I mean it’s getting less gas/oil mix proportionally and therefore less protected.

A saw can run at half throttle, but it’s not designed to work here for long periods, doing so risks damaging the engine.

You might find this page useful, it lists common Chainsaw parts and tools I use in the workshop. 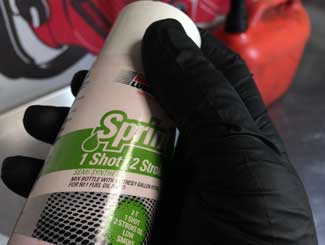